Well, I kind of let this go to the wayside a hot minute ago, but I think it’s time to get back at it.

The snow is all butt gone down low, here in the Last Frontier, and before you know it the first Kong’s of the season will be entering the rivers.

I am taking this year and next year off from guiding due to some things out of my control. But, if everything goes well we will be back in operation in 2021. Unless of course we decide to move our operations to the salt, and then it will be another year due to the increased cost of a brand new ocean boat. We shall see!

Until then, thanks for following along, and stay tuned for more posts this season.

Whether you’re bumping along in a drift boat on the Salmon River in Pulaski, NY, sitting on the banks of the mighty Skeena, or weaving through one of the many log jams on the Situk River, there is one thing for certain, you can find die hard steelheaders on all of them. Regardless of the waters you find yourself on, one thing is for certain, a steelheaders insatiable appetite for head shakes and hard runs.

I recently returned home from an excursion to Yakutat, Alaska where I fished the Situk River. The Situk isn’t huge by any means, but it is very unique in that almost the entire length of the river is comprised of spawning gravel. This allows for a very healthy fishery and successful spawning of not just steelhead, but the multiple species of salmon that also use the river to carry on future generations.
Logistically, fishing the Situk can be as simple or as complicated as you want to make it. There are many outfitters that will rent you drift boats, or you can do what I did and bring along your one man cataraft and camp along the many gravel bars along the length of the river.
I knew heading down to the Situk that conditions would be less than ideal. The flow was only at 100 Cubic Feet Per Second (CFS) as compared to the normal 350-400 CFS for that time of the year. But, this trip was planned well in advance of knowing what the conditions were, and short of the river completely blowing out, I was committed to going.
On a trip like this you want to be sure to have everything you are going to need, so this meant I had to have all my Trick Em’ Beads ready to go before I flew out. Needless to say I almost didn’t have enough beads, and I had four good size boxes with me on the trip. From losing gear in the timber, to breaking off on one of the many large steelhead I would not bring to hand, by the end of the week, my stocks were running low. Not all of the my fish came on beads, and I managed to trick a few with jigs and pink worms, but my money maker for the trip was 8mm and 10mm creamsicle with a few other flavors in my bead box tricking a few fish when things slowed down.
I have fished for steelhead in many places, to include many of the tributaries of Lake Ontario, Lake Erie, the Skeena, Kitimat, Squamish, and many of the steelhead rivers on the Kenai Peninsula. There is nothing like hooking a fresh dime bright steelhead fresh from the ocean. Even the smallest of steelhead fight so hard, that every time you would think you hooked into a monster fish. I can only imagine what a large dime bright 40” fish would fight like.
I fished as hard as I could for six days, and by the end of the trip my body was feeling it. My hands were dried out from constantly having them in the water, and my fingers were tore up from unhooking fish. It wouldn’t have been so bad if a certain individual hadn’t lost my pliers that I let him borrow to unhook one of his fish.
If you’re planning a trip to your favorite flowing body of water, or one that is a trip of a lifetime, be sure to have all the essentials packed, as well as more tackle than you think you’ll need. To include ample amounts of Trick Em’ Beads and Jigs! 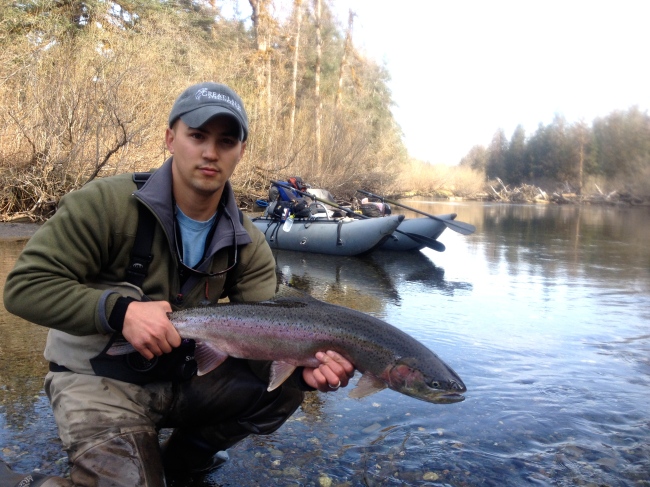 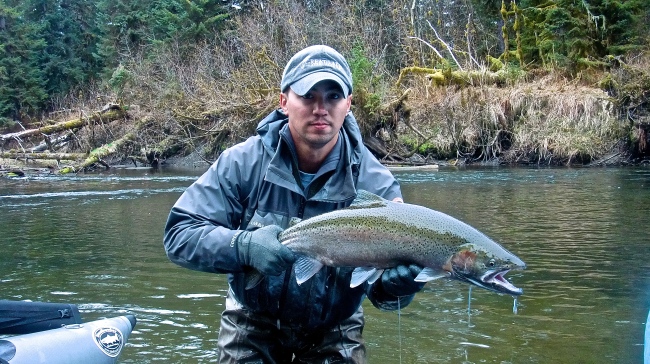 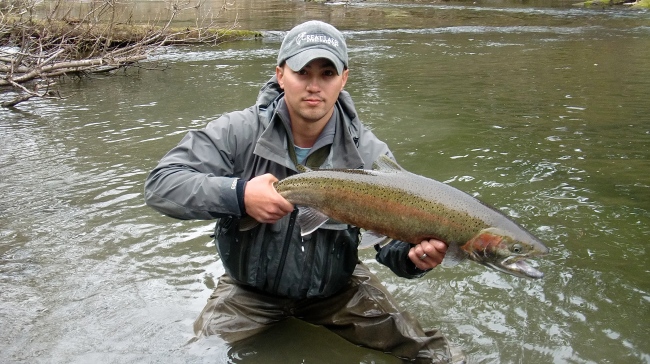 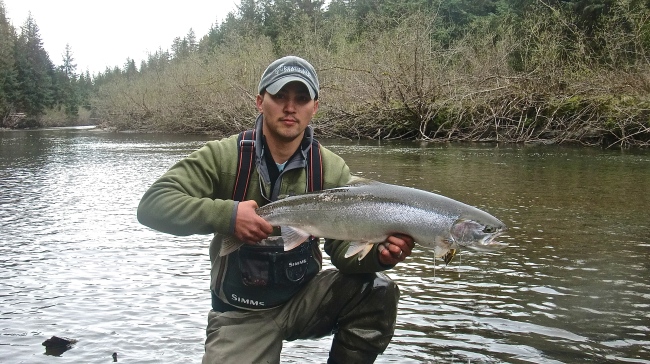 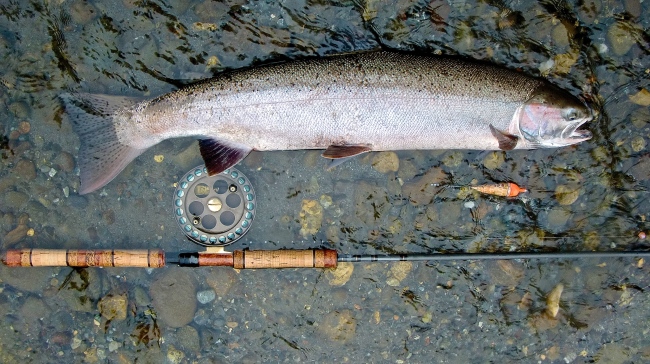 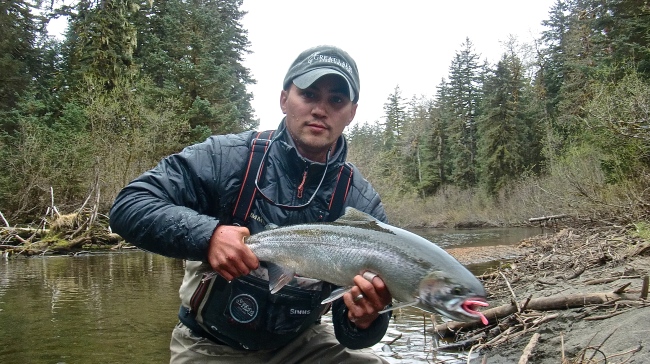 ….from the Alaska Dispatch…..

A quarter mile from the Alaska Airlines terminal at the Yakutat Airport there’s a World War II-era hangar. Inside of that 40,000-square-foot hangar is the home of the Alaska Warbird Museum, the Situk Fly Shop, and Bob Miller.

Miller, the founder of the non-profit museum and owner of the shop, sells gear and provides fishing reports for thousands of anglers who visit — or wish they could visit — the Situk River, a 16-mile river famous for its massive production of steelhead trout and salmon. Miller has big dreams of some day tapping into that traffic and taking people on glacier tours in his authentic WWII aircraft parked inside the hangar. But that’s another story. 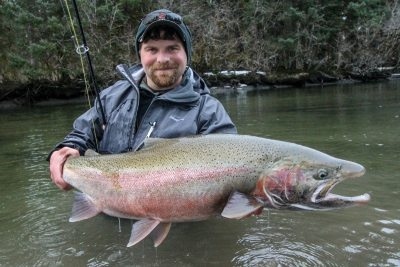 So…today I picked my buddy up at the Airport in Anchorage. He was coming back from across the bay after guiding for the month. We go through the normal routine ,”How was the fishing, and how was the money?” He tells me, I made dick, the fishing was great, and the boss was a f’in douche rocket and ripped me off bad!

The boss…Jack Johnson… A.K.A. Douche Rocket

First he tells me, he thought he would be making decent tips, plus, he would be gaining great experience, BOY was he wrong!!

So, then he tells me the owner (Jack Johnson A.K.A. Douche Rocket) took 25% of the tips from all the guides and then some. Not only did he steal tips, wine, and banana bread, but after he was done with them for the season, he short changed them and handed them a 1099 form to say they were on their own. After making them think they were working under his jack wagon guide lodge, “LEGEND LODGE”, they soon realized they were working for themselves.

Let’s be honest, in reality it should be called, “Fuck You, Pay JACK!”.

He works his “guides” (aka Kunta Kinte’s ) harder than a DREAM ACT Mexican at an Orange Grove in Florida. Yeah, it’s that bad.

Needless to say, if I were going to throw down good money to a guide in Alaska, I damn sure wouldn’t be giving it to  Jack Johnson. I feel bad for his unknowing apprentice guides, who work for little to no pay thinking they are working for a legit guide service. Needless to say, if a guide works for this wanker for more than one season, they are messed up in the head and need more psych work than Casey Anthony.

Oh! Before I forget, you can get a KILLER deal! If you donate $100 or more to Trout Unlimited you can get a guided trip for 50% off!! If not, then you are stuck paying $4299 or more, depending on what Jack Johnson wants to charge you.

I must say my Simms G4 waders and gear has been put through the ringer here in Alaska and it has more than handled the abuse. If you’re looking to spend money on great gear get yourself some Simms fishing gear! 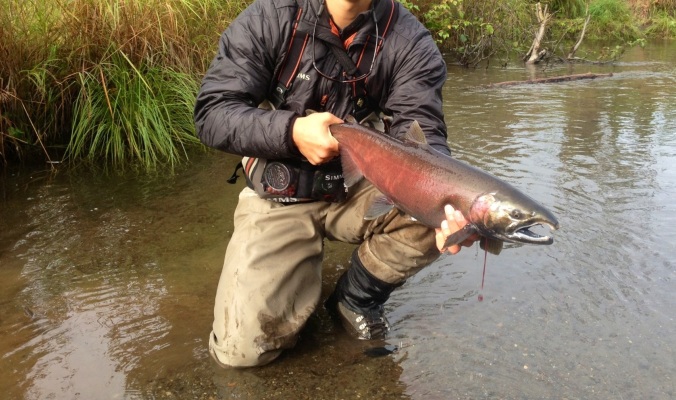 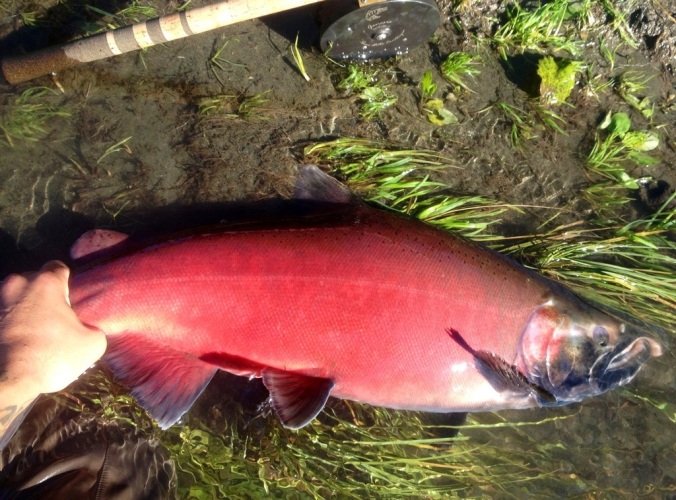 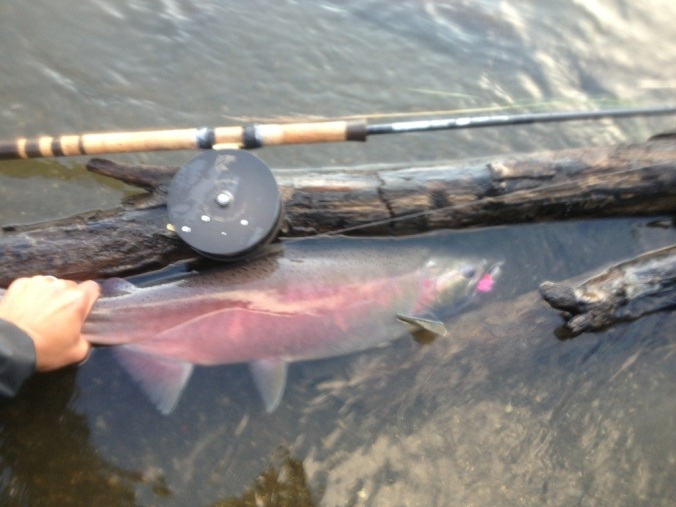 If you have some hero shots to show off, drop me a line and let me know where you caught em. No need to name specific waters, the state you caught your pig at is plenty enough.

With Fall creeping ever closer it can only mean one thing. Steelhead!

The fishing has been steady, but you won’t find out where this guys been fishing. Ok, I will give you a hint. It’s west of the Mississippi.

I’ve been hitting a few cohos here and there as well. 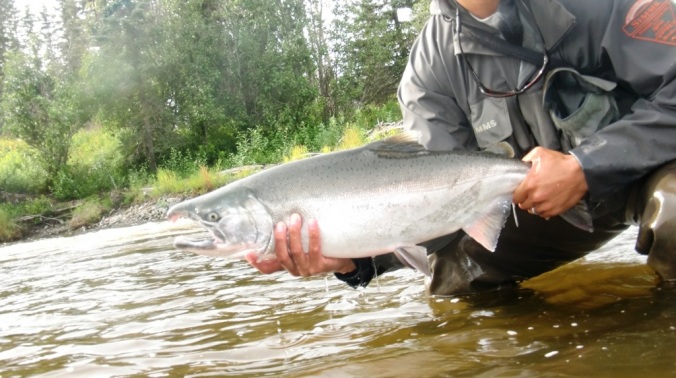 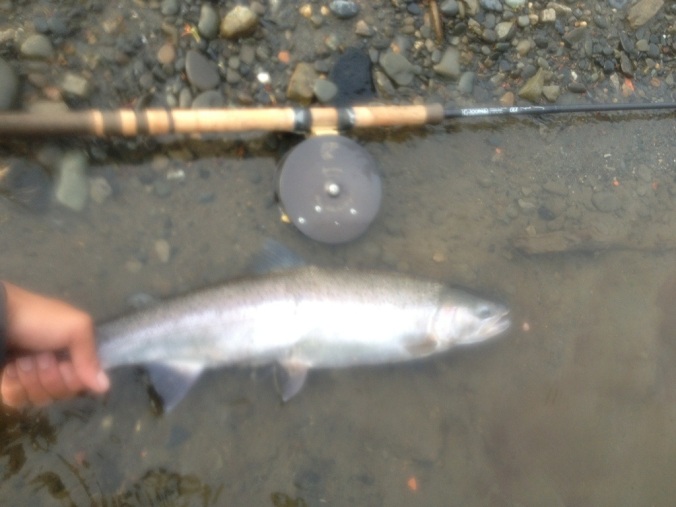 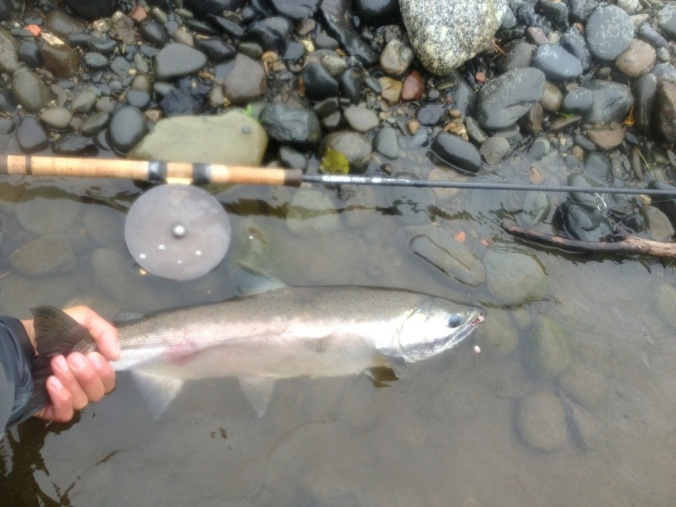 It had been a long time since I last posted and I have been very busy since then scouting water and learning about the area. Needless to say, there are a lot of fish to catch.

So sit back and enjoy the photos. I will have a few stories and reports to roll out in the coming weeks. 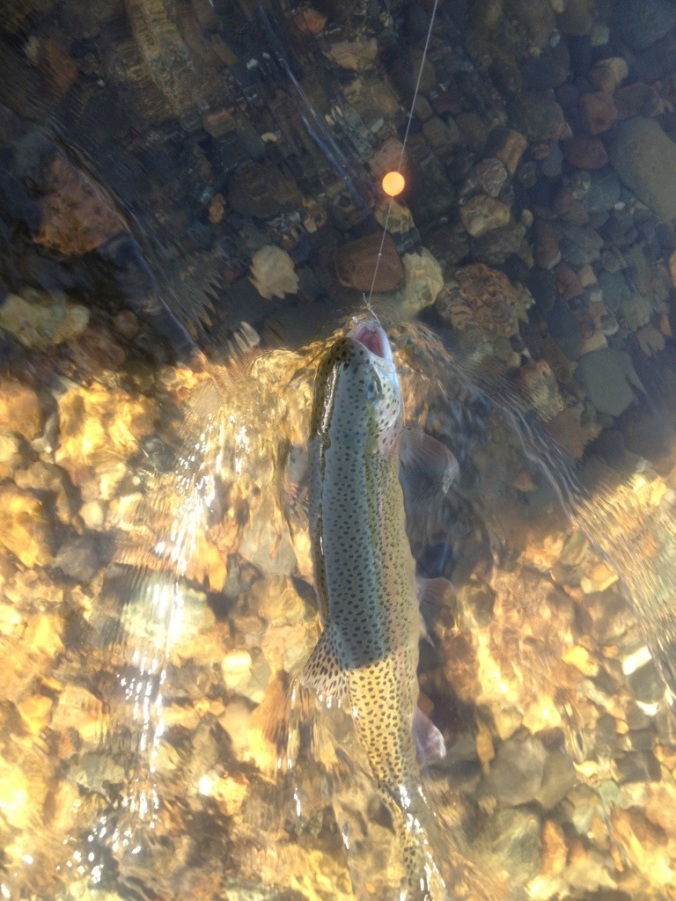 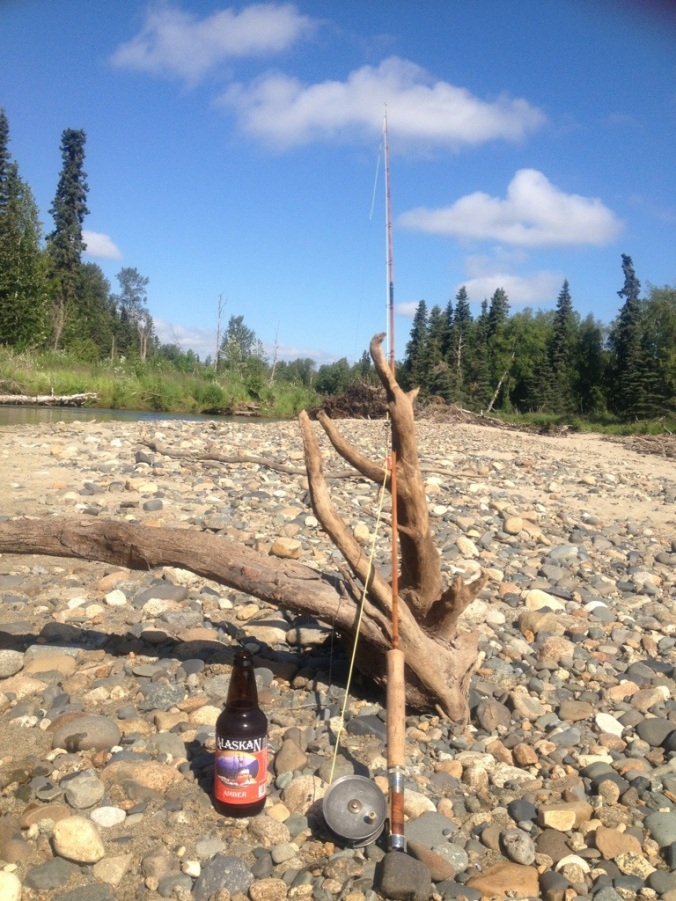 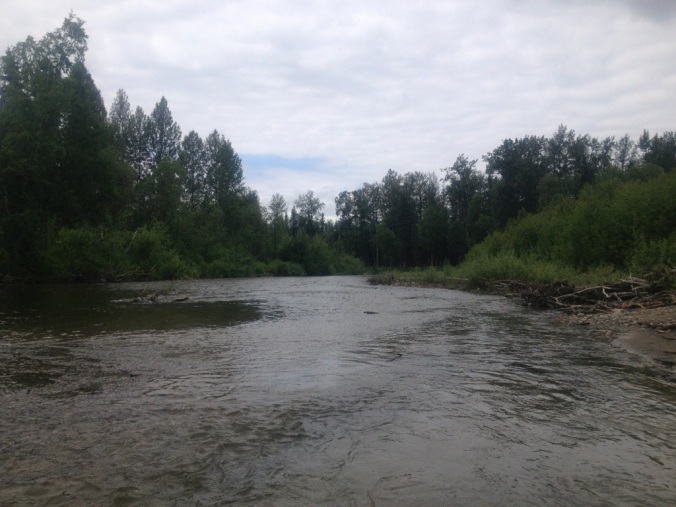 Get out and fish!

Ready or not…here I CHUM!!
Blog at WordPress.com.